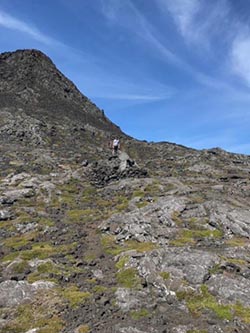 Pico is current dormant, some steam and warmth at the very top, the volcano dominates the entire island and is on the American plate. In the winter it can be covered in snow despite its southerly location, but the surrounding warm Atlantic waters quickly melt any falls.

Mount Pico (Portuguese: Montanha do Pico) is a stratovolcano located on Pico Island, in the mid-Atlantic archipelago of the Azores. It is the highest mountain of Portugal, at 2,351 metres above sea level, and is one of the highest Atlantic mountains; it is more than twice the elevation of any other peak in the Azores.